When I left the previous day, I had really enjoyed walking while it was still dark, under the night sky, with stars you could still see. I had planned on doing the same that day: I woke up early, took my breakfast and packed my stuff way quicker than I used to and I was out around 7h. The first half hour was great as planned, with barely a hint of a rising sun behind me. I couldn’t see far ahead and I lost my track once because of that; but soon enough the sun rised enough to let me see where I was going.

Around one hour and a half after I was gone, I started hearing a sound behind me: I took my earphones off and there was Loïc, running, all red-faced and sweaty, doing what he said he would do. Not long after I arrived in Calzadilla de los Hermanillos, the last stop before a long stretch. Loïc was there, taking a little break. We grabbed a coffee and he left, running. He felt confident he could make it all the way to Mansilla de las Mulas. I was eager to see how bad he would be feeling at the end of the day… Bad Kevin. 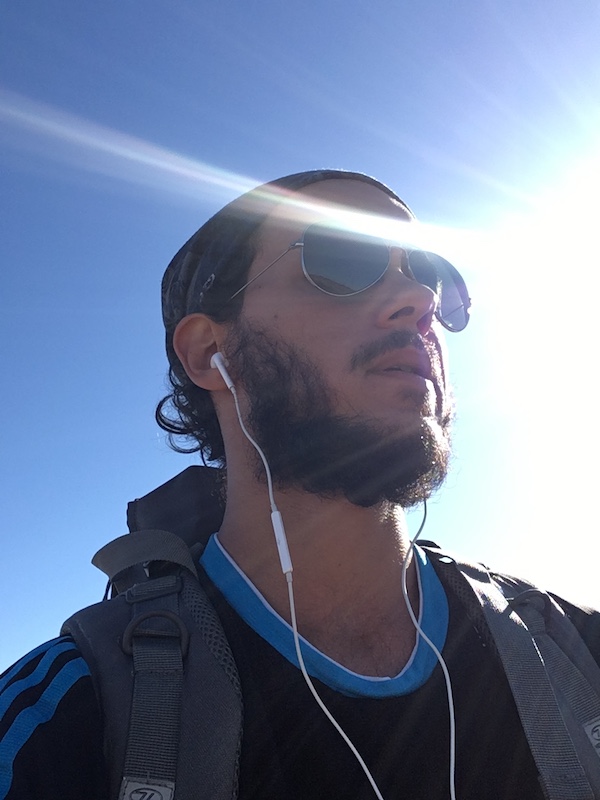 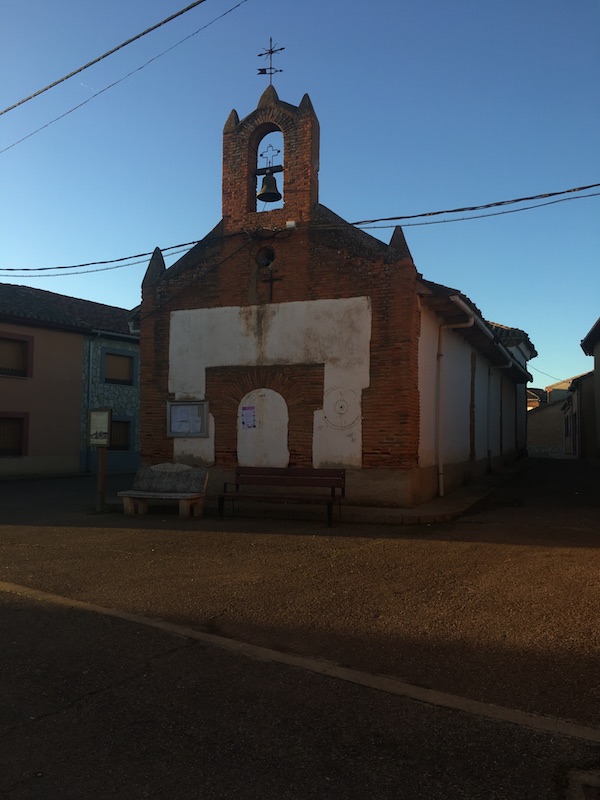 Bracing for the sun

The next 18km were not particularly noteworthy, mostly fields and a few trees here and there. Overall, the paths we had in France were more interesting. The meseta parts would be at the bottom of the ranking if there was one; luckily it was soon coming to an end.

I was relieved to finally arrive in Reliegos. Right after I entered the town I saw a cyclist pass me by, and he had a bear on his back… The same bloody bear that Saula was carrying since Burgos! I was already amazed that she still had it, but now the thing had found a new carrier… 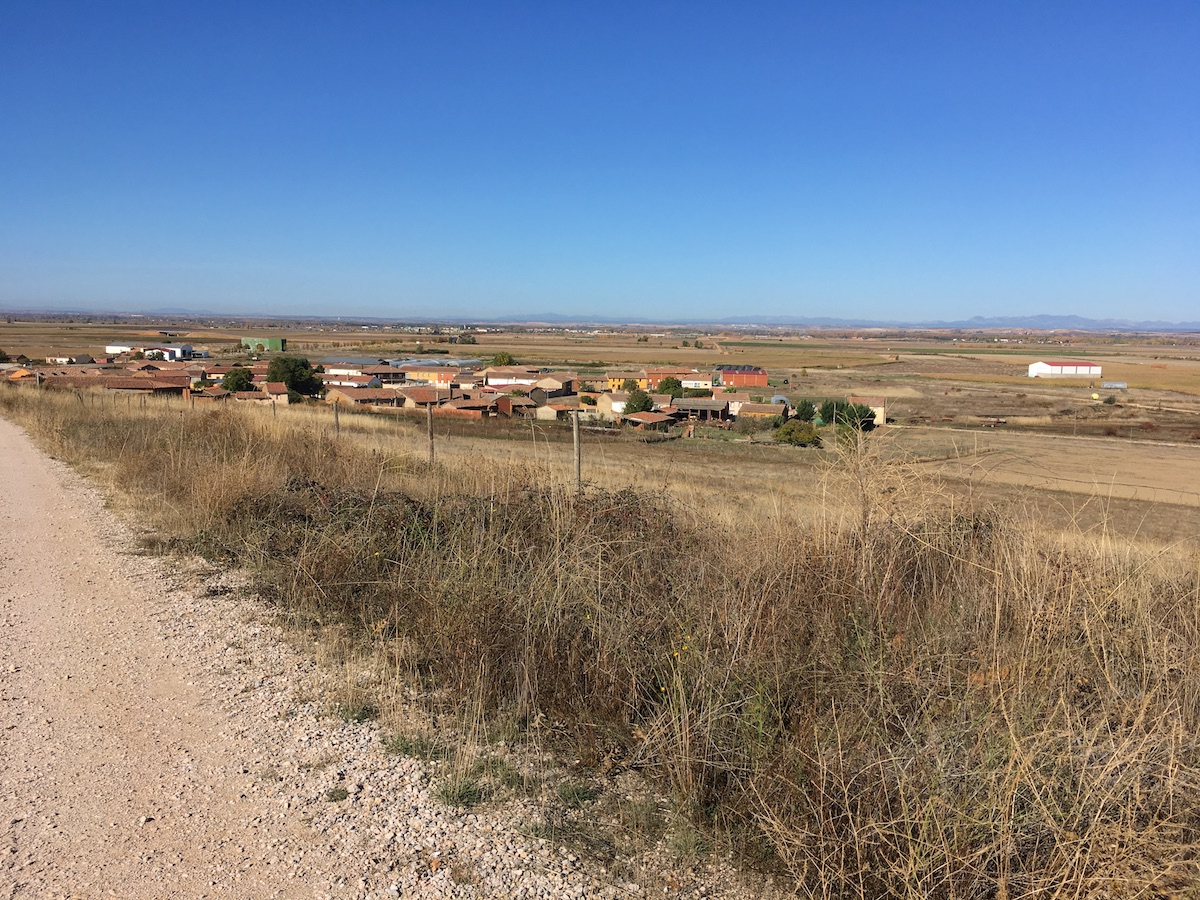 Diego (the cyclist) and I stopped at the same place for a beer. He was from Ecuador, and I had seen him in Sahagún the day before. He had run into Saula on the road and had offered her to take the bear to Mansilla and drop it at the albergue. The bar we were in had its walls covered in writings, and there were a few Elvis memorabilia here and there. I remembered Jem mentionning an Elvis bar the night before: this was probably the place.

The owner seemed like the happiest man on earth. He was singing along his radio, dancing and cheering while drafting our beers and indulging us with very large tapas. I didn’t stay there long, but many friends spent the whole afternoon there drinking with the owner. They told me that he was making more money than he needed during high season so come September, he was happy to be generous with everybody. Quite a character!

I made for Mansilla and checked in the albergue once I found it. The lady in charge was swearing all the time, laughing and teasing people, and asking everybody who and where was the owner of “el puto oso” (the fucking bear)! Later, she came with a saw and asked if anybody had pain in the legs… 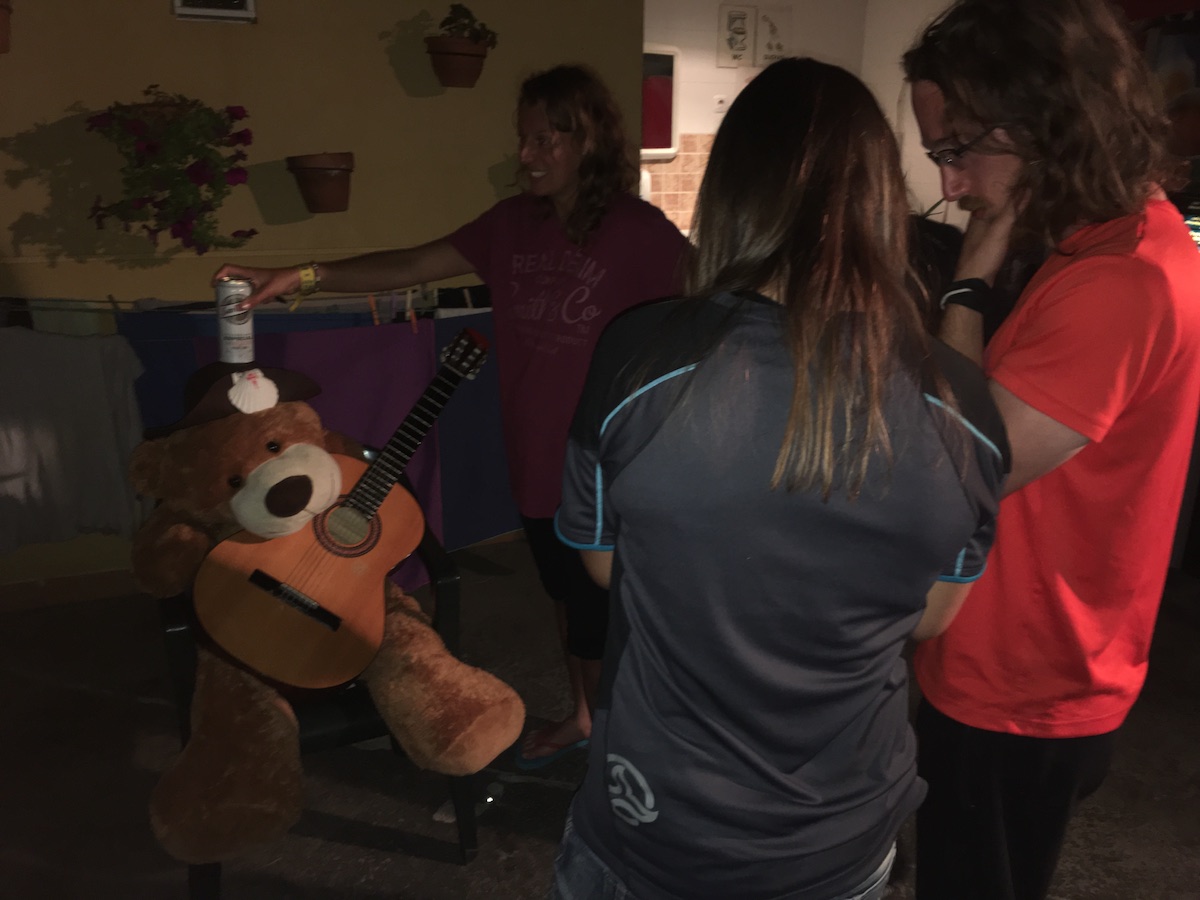 Meanwhile, Loïc was there too. He had spent the afternoon sleeping and recovering from his run. I had forgotten to warn him about a common issue among runners: nipple-burn. He obviously felt sore in the muscles, which was funny from my point of view but less from his. All joking aside, for someone who never runs, he managed to run around 30km. Very impressive, and speaking as someone who enjoys running but never managed to perform a half-marathon, I was a little annoyed. But between his performance and James’ challenge, I had enough examples to know that all I needed was to push myself a little bit more.

We were a large group that night, with most of the pilgrims I was used to see at the albergue. The wine flowed, the food was good, Laura (the hostess) was entertaining… The night was really one of the best of the whole trip. The people there started to feel like a band, after a few days of running into each other all the time. Some called it “the camino family”, but I’d say it’s more like being classmates in your last year of school. People hang out by affinity, a few couples pop up here and there, there’s some people you like less than the others, and you know it will come to an end at some point; but you still make the most of it while you can. And I, for one, know that I did. 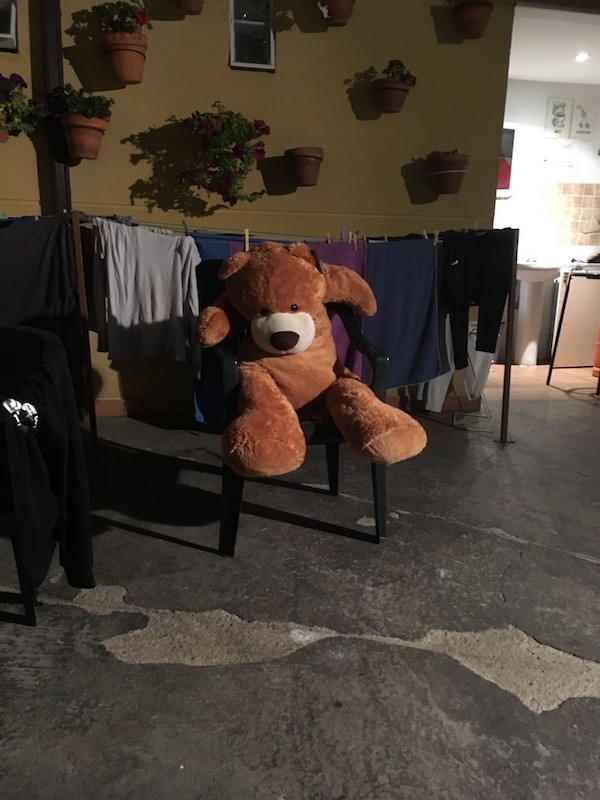