The next day was our first short day. We took a quick breakfast at Guy’s, and he dropped us back on the GR653, near a place called Roquetaillade. The sky was gray and cloudy, and when we reached Auch, Loïc started to feel some pain in his leg and then it started to rain. So we decided to stop there for the day and to take a longer break than usual.

For the second night in a row, we didn’t plant the tent: the church ran a pilgrim’s hostel, donation-based (usually called a donativo), and that’s where we stayed and met our first pilgrims, Daniel and Françoise. They had started in Arles at the beginning of september and planned on stopping before the spanish border, at Oloron Sainte Marie.

During the rest of the day, we walked around the city a bit once the rain had stop, took coffees here and there and rested, most of all. We really needed it.

Waking up, we had a foggy view over Auch, but as the sun got brighter the sky got clearer and the view better and better. We started walking around 10, Loïc still having troubles with his leg/ankle and I with my blisters.

We arrived at Barran around 14 and took our lunch break around the church, as well as a nap. The break was long because we were waiting for the supermarket to open. What we didn’t notice is that it wasn’t open on mondays… The sign was unreadable unless you were right in front of it.

We cursed it and then moved on to L’Isle-de-Noé, which had the same issue - no store opened on mondays. We were getting low on food but had just enough to hold on until the day after. We ran into Daniel & François again, something that would happend pretty much every day until they stopped walking.

The city had a kind of castle with a large park, and that’s where we planted the tent, in a spot a bit away from everything. We were getting better and setting up the tent quickly and finding a good spot before it was dark, as well as getting used to sleeping in a tent most of the time.

We learned that the castle served as a kids school when the sound of their parents dropping them woke us up. We arrived in Montesquiou just in time for the coffee break, and I finally had the rich idea of doing something about my blisters. I spotted a pharmacy, bought some bandages and there I was, with feet that felt brand new!

We started walking again, Loïc still having issues with his ankle. We arrived at Pouylebon around 14h and took our lunch break there.

Between Montesquiou, Pouylebon, and the littles towns of the past few days, it was hard not to notice how empy and desolated they all seemed. Not a lot of stores, usually only one trying to tend to all the needs; lots of closed shop and ruined houses… When you are used to live in bigger cities, it feels like being in a ghost town or in a place out of time. And the next town, Saint Christaud, was the same.

We arrived at our destination for the night, Monlezun, around 18h. We decided to plant the tent right next the school because we couldn’t find a better spot, and we would leave very early in the morning.

The town was located in higher ground that its surroundings, and we spotted a few ruins maybe one kilometer away, but we were too tired to go and there was no obvious path. But once it was dark, some lights made the ruins look really good. The article on wikipedia for Monlezun has a good picture of the ruins, which are from a castle it would seem.

We left Monlezun as planned, around 7h, and walked in the fog until the first town, Marciac, which is known for its jazz festival “Jazz in Marciac” that takes place every year in august.

The arrival in the city was a bit eerie: it was so foggy that we couldn’t see very far away and we had no idea wether the town was big or not. And then, we arrived at what looked like the main square and it was market day! The town had a really nice vibe to it and so we stayed there for about an hour and a half, between the coffee break and the market. Loïc bought yet another book, as if he didn’t had enough already.

The rest of the day went by pretty quickly. We arrived at Auriébat in the beginning of the afternoon, and at some point we took a wrong path and lost ourselves… We had to backtrack, which made us lose between 20 and 30 minutes. It could have been worse. 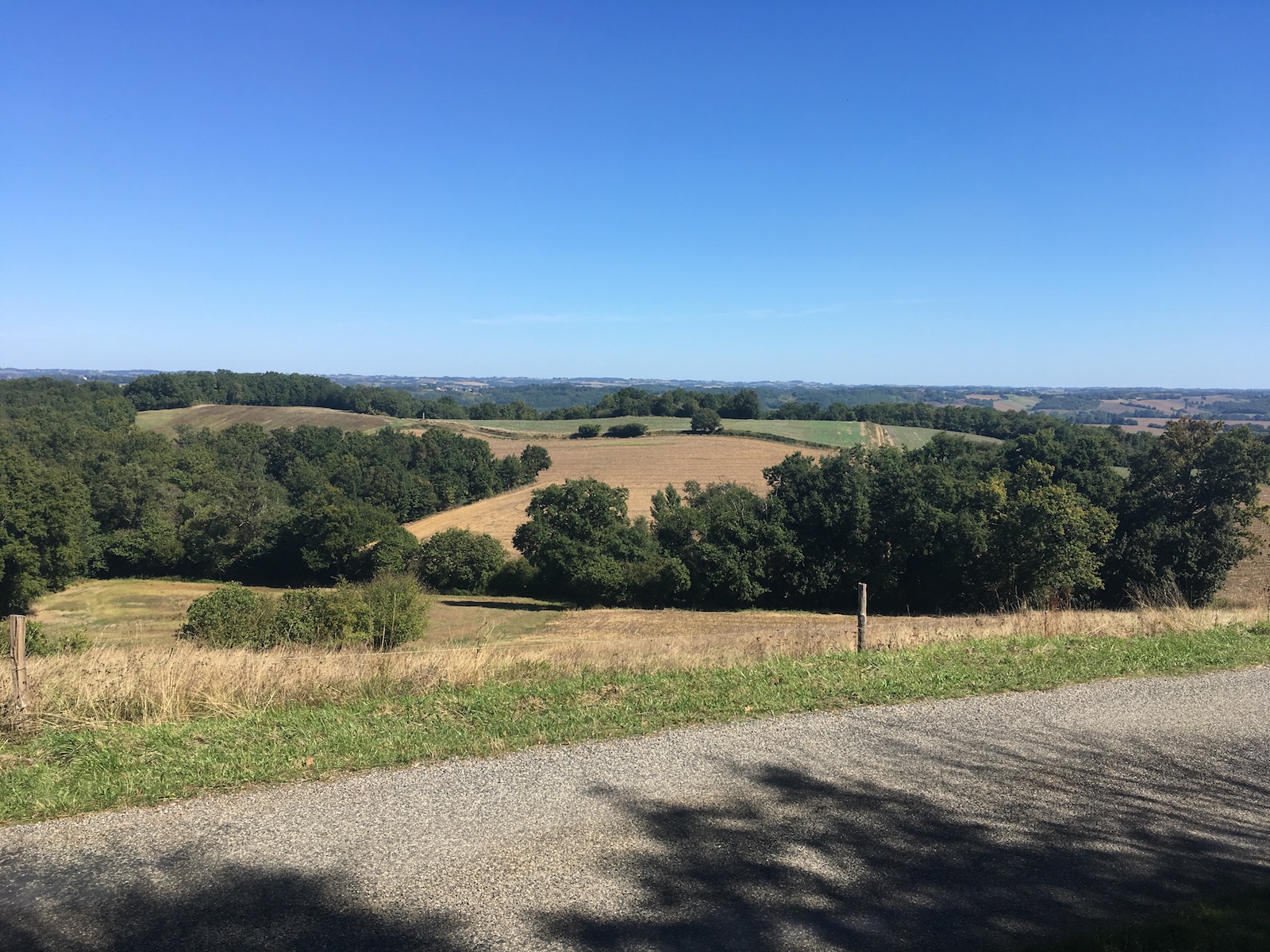 One of many fields in the south

Around 16:30/17h we arrived at Maubourguet, our stop for the day. We were used to small, ghost towns, and now we had two cities full of life in a single day! It was almost overwhelming. We treated ourselves a good pint of beer to celebrate the end of the first week of walking. It seems so easy now, but back then it was quite the milestone.

I stopped by the tourism office to see if they had a map of the area, and walked away with a very good guidebook and a spot at the city camping, all offered by the nice lady of the office. Maubourguet, we owe you one.