After two days spent in Paris and one day in Toulouse, it was finally time to start walking. As I said, my notes for the first ten days are very brief, so I have to rely on my memory for this section, and we’re talking about events that happened two months ago… Still, I remember a few things about the first day. Mostly, the neverending suburbs. Loïc and I were very excited and restless to start our hike, but after two hours spent walking in Toulouse and its surrounding cities, the excitation was mostly gone.

There was a few parks here and there though, and we had enough to talk about to not think about the dam under our feet. It was around midday that we thought about a project that we never got around to do, but that made us laugh for a while. During our test hike, we noticed that canned tuna salads were cheap and good enough (as far as canned food goes), so it had became our first choice of hiking food.

And while we were having our lunch (or was it dinner?) break, we thought about making a youtube channel, where we would be testing canned tuna salads, comparing brands and tastes, giving them grades, and eventually going as far as making partnerships with the brands once we’d have a good following… It would have been a fun way to let our friends know that we were doing allright and where we were without actually having to talk to them. We even thought of the background music :

But laziness and the lack of proper editing material got in our way. We’re still convinced it would have been a hit, though.

So, our route took us through Toulouse and Blagnac and then around the airport. While the walk was not fun, seeing planes land and take off from up close is always something that will impress me. We passed very close to the airbus museum, too, with some interesting old planes on display. At some point in the afternoon, we arrived in Pibrac and took our first coffee break of the day. 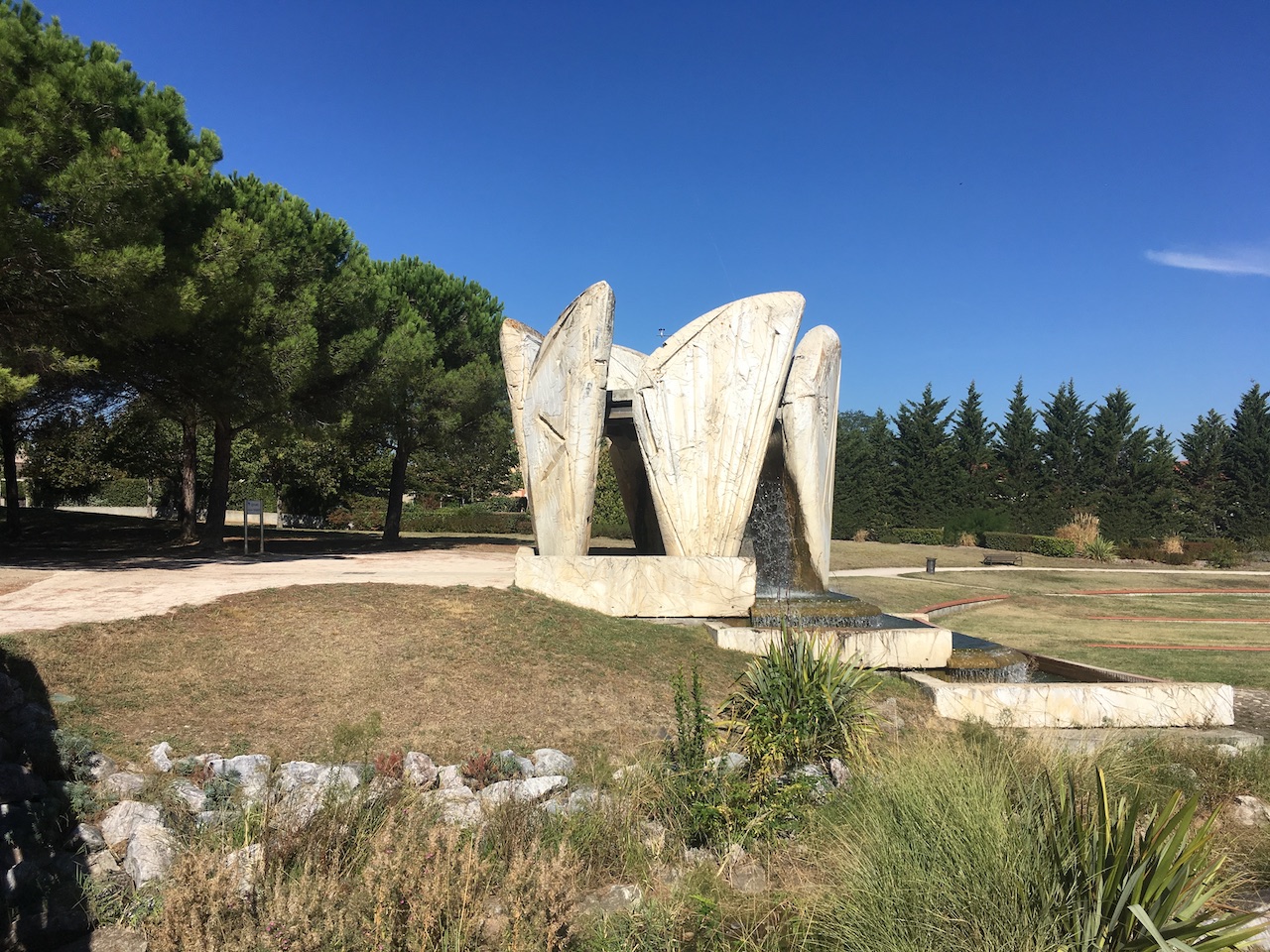 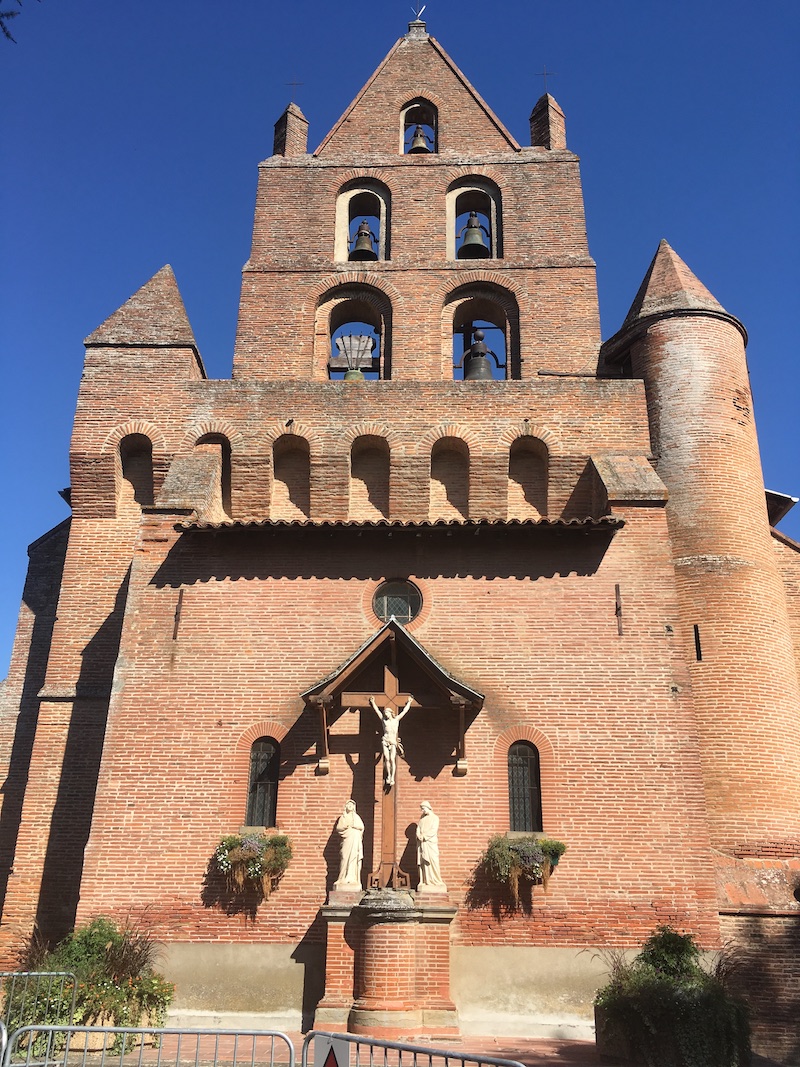 A statue in a parc in Toulouse The front of the church in Pibrac... I think.

From there, the rest of the day is hazy, but I remember it felt harder. Since our bodies were not yet used to walking with heavy backpacks (around 15Kg at that point, when we had a few cans and full bottles of water), we felt the exhaustion on our backs, our legs, our feet… On top of that, the sun was quite strong. Not that I mind it, but it doesn’t help either.

Around the end of the afternoon I started having my first blister, on the side of the right foot. I didn’t expect it since I had no issue during the test hike, but I suppose walking in city streets all day is different than walking on grass and that’s what happened.

But we pushed through and walked until we found a nice spot to set up the tent. The first two spots were less than ideal, but the third one was just right: the Lac de la Bordette. We arrived there quite late, around 19h, so we thought it would be better for the next days to plan a little bit more and not end up in the dark, without a place to sleep.

When we arrived, I remember being quite happy because my phone registered that we walked 47Kms… Which cannot possibly be true, looking at the map. Best case, we did between 35 and 40, which might have been too much for a first day. Here is a recap of the route we took. I’ll try and put one for every day.

It turned out the lake was quite the spot for cyclists. A few came by when were setting up the tent the night before, and some more when we were packing up and getting ready to leave. We left through the forest. The path was not bad, but god, there was so many mosquitos. We were dressed like terrorists, with bandanas masking our faces, and frankly I’m surprised that there wasn’t a forest ranger to take us down.

But we got out alright, took a coffee break in Pujaudran (I assume we did, since we took coffees everywhere), and kept going until we reached L’Isle-Jourdain where we took our lunch in a fancy place (in front of a supermarket, eating tuna cans).

I don’t remember much about that day and probably nothing special happened, except that the place where we planted our tent looked awesome. It was right at the exit of Monferran-Savès, right next to the cemetery. There was this small fishing pond that mosquitos seemed to like, so we thought we might like it too. And we did! The sunset looked amazing.

The pond, the tent and the town

Most of the third day is also lost somewhere in my memories, except for the events of the end of the day. Before that, we walked through Gimont and L’Isle-Arné, and then walked some more until we were around Lussan.

We were looking for a nice spot to plant the tent, and we found a lake nearby using google maps which seemed like a good candidate, and should have looked close enough to the lake of the first night. At this point, my blisters were becoming really painful in the day: each break meant that I had to get used to walk on the blisters again and so I was slow for a few minutes. Between that and the exhaustion from walking a few days… Let’s just say we wanted to find that lake quickly.

And we found it! Only to realize it was not a good spot at all. No flat ground around the lake, and even without that the ground was bad and uneven. But Loïc noticed a guy swimming in the lake, and once he was out he went and asked him if he could point us to a better spot close by.

Turned out the man was a farmer and he told us we could camp on his land. Better still, he was going to pick us up with his car so we wouldn’t have to walk! Oh the joy. He came back fifteen minutes later and told us that he had a spare bed we could use if we wanted to. Half an hour earlier despair was setting in, and now we had a bed to sleep in !

The night kept getting better and better. We helped him with some quick tasks and then he cooked for us, but not before letting us have our first showers since we started walking. He talked to us about his lands and what kind of vegetables and fruits he is growing and selling, making for an interesting and enlightening evening. He had a ham that was so delicious that it became a running gag between Loïc and I, and a point of comparison for all subsequents hams… I’ll admit though, I wasn’t quite happy with a stranger holding such a big knife close to me. But well, the ham, the meal, and the bed made up for it.

And so much wine. Between the full meal and the red wine, we were knocked out and ready to sleep way before our host. I’ll always keep this evening in mind, and I hope Guy (our host) fares well in his endeavours. God knows being a farmer isn’t the easiest way of life nowadays.