In spite of the long and exhausting previous day, I woke up very early, around 6:30. I went in town to get a coffee and breakfast and waited for Loïc to be ready, and we left town around 8. On the road to the next town, Torres del Rio, we met Jean-Louis, a fellow pilgrim who was born in the same region as Loïc and I live. After spending hiw whole carreer in the french navy, he was now retired and enjoying life one project at a time.

We took a quick coffee break and started again. Loïc was busy eating grapes on the road, so I ended up in Viana slightly before him. I used the delay to perform my duty and made my weekly phone call to my family, then it was time to step inside the town. After walking around a bit, we had coffee (again, I know) with two other pilgrims, Oana and Jem.

Jem told us a bit about Cesare Borgia, a historical figure burried in Viana, known among other things for his cruelty; Jem compared him to Ramsay Bolton from Game of Thrones. Then he left, and the three of us wandered in smaller streets to find a place to eat. And while we were enjoying our bocadillos, Jem came back to add that Cesare Borgia would be Ramsay Bolton, but living in King’s Landing. Funny how he walked all that way back and managed to find us just to add this one detail.

The three of us then made way to Logroño, our goal of the day and the end of the road for Oana, who was finishing her camino there due to time constraints. We met Jean-Louis again before the end of the day, along with a friend of his, and the five of us walked until we reached the city. 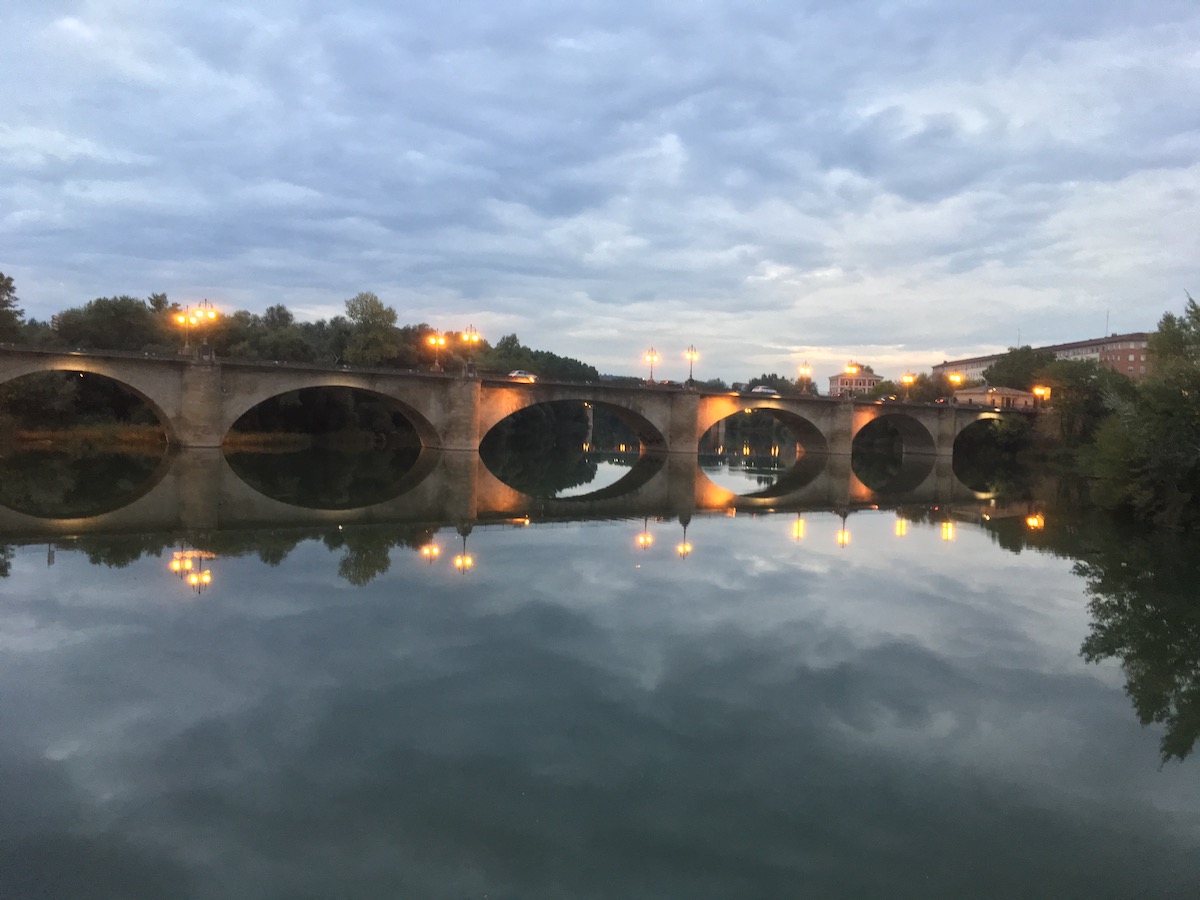 I was in touch with Ilay so I knew he was in this city and in which albergue, but Loïc wanted to go to a cheaper one, so we separated for the time being. After we had split in Puente la Reina, I didn’t think we would be meeting Ilay again. But I forgot that he was not walking long days due to an injury, and after our 45k-in-one-day it was only a matter of time. I didn’t expect it to be so soon though! It was nice to see him again and annoying-yet-funny to hear his lousy puns once more.

He introduced me to a few friends of his, including Saula and Krista whom have been walking with him for the past couple of days. We bonded over our mutual boredom of his neverending puns as well as cheap pizza slices. After visiting the town, we went back to our albergue and spent the rest of the evening drinking, laughing and bantering with other pilgrims, Edouard and Monica. 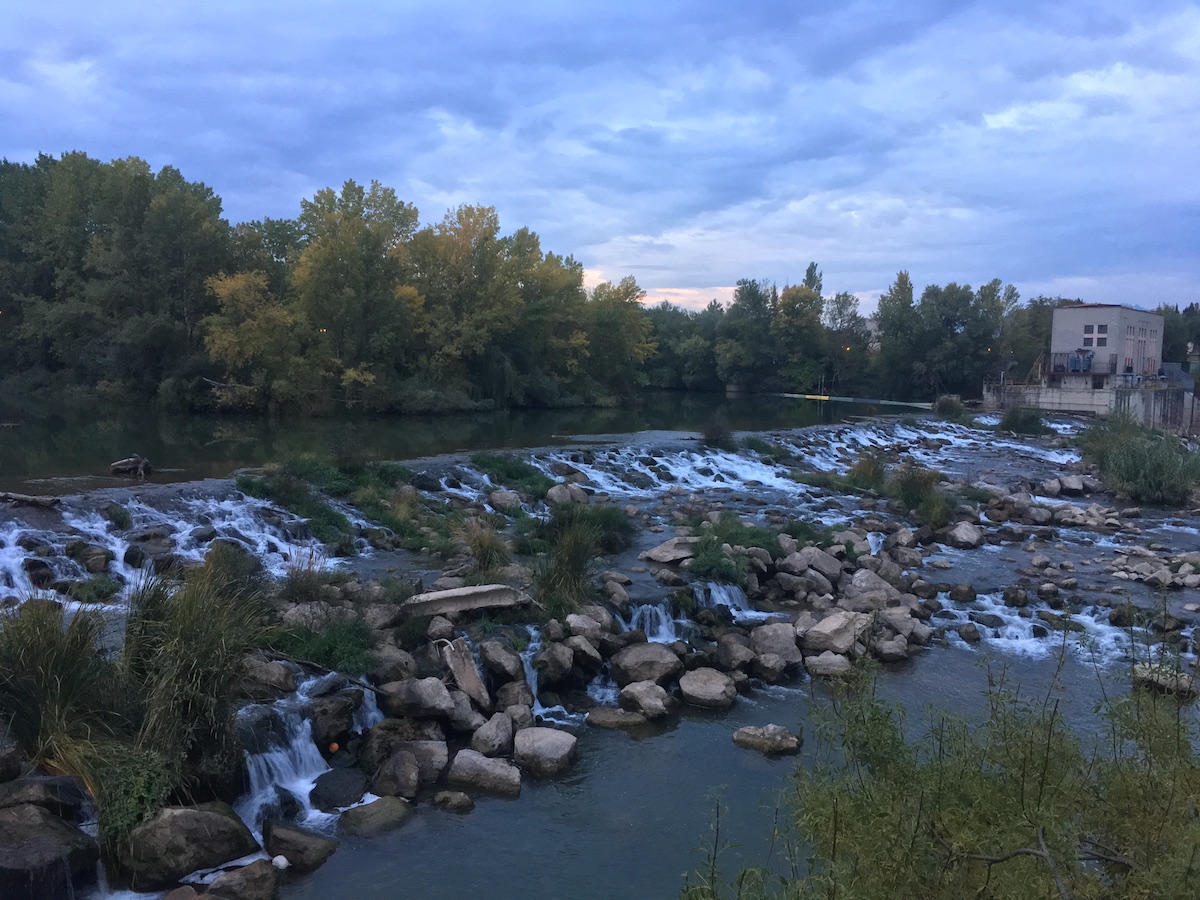 That day, I noticed that Logroño was pretty much half way between Toulouse and Santiago. It brought mixed feelings: it was a milestone, an achievement, but at the same time it took us almost a month to get there and I felt that it should have took us less time. But I shoved those feelings aside quickly: I was enjoying the walk a lot more than I thought I would, and the endless meetings made for very interesting days.

I once again woke up quite early. If I remember correctly, Loïc got up way earlier due to a badly set alarm and started walking way earlier. After breakfast, I walked mainly with Krista for the first part. It was unsettling at first to try tand walk alongside new people with a very different pace than what I was used to, but once we got to talking, my mind was off the walking and I was doing just fine. 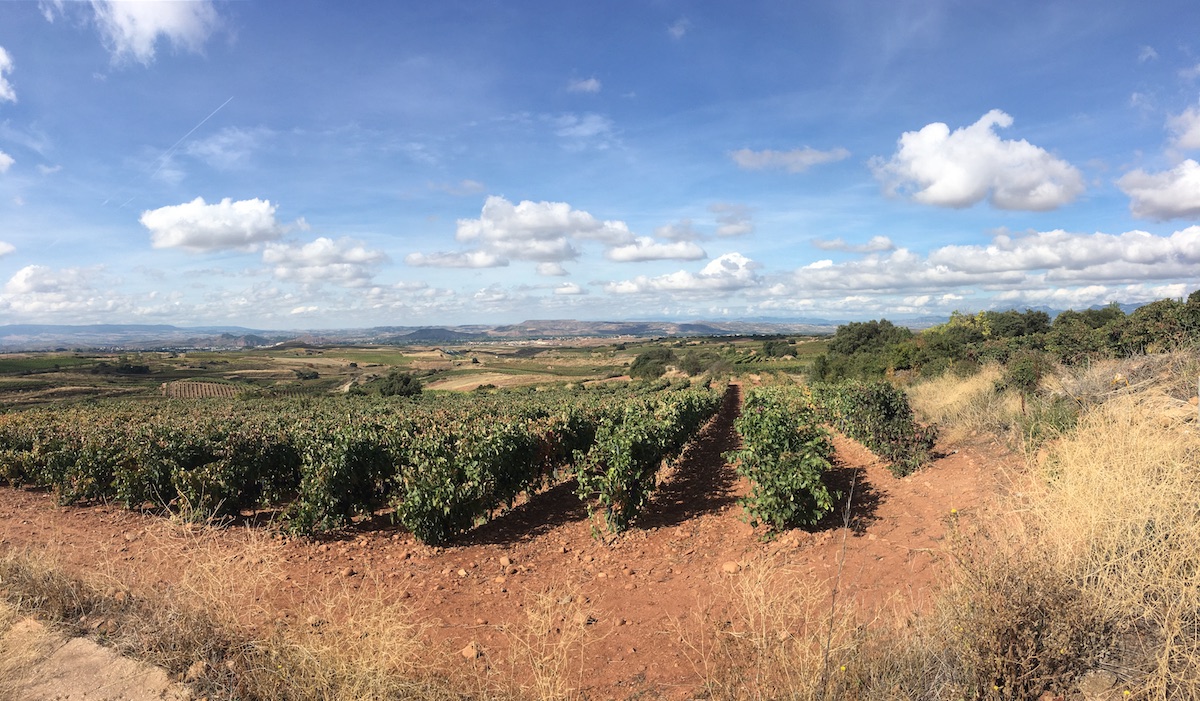 We took our coffee break in Navarrete, and we were joined by Monica. As soon as her coffee was on the table, Ilay or Krista moved slightly a bag, which then fell on the table, which then fell off the terrace and everything on it splattered, just as you’d expect from a slow motion sequence in a movie or music video. It was funny how everybody helped to clean the mess except Ilay and Krista, the “guilty” ones :)

I stayed with Monica and grabbed another coffee while the others left, then walked with her for the rest of the day. It was very easy talking with her, even though we had little in common, which made for interesting conversations. We caught up to Ilay and the girls at some point, and we arrived in Nájera in the middle of the afternoon. I knew Loïc was there so I was stopping here for the day and Monica as well, but Krista and Saula wanted to keep going. 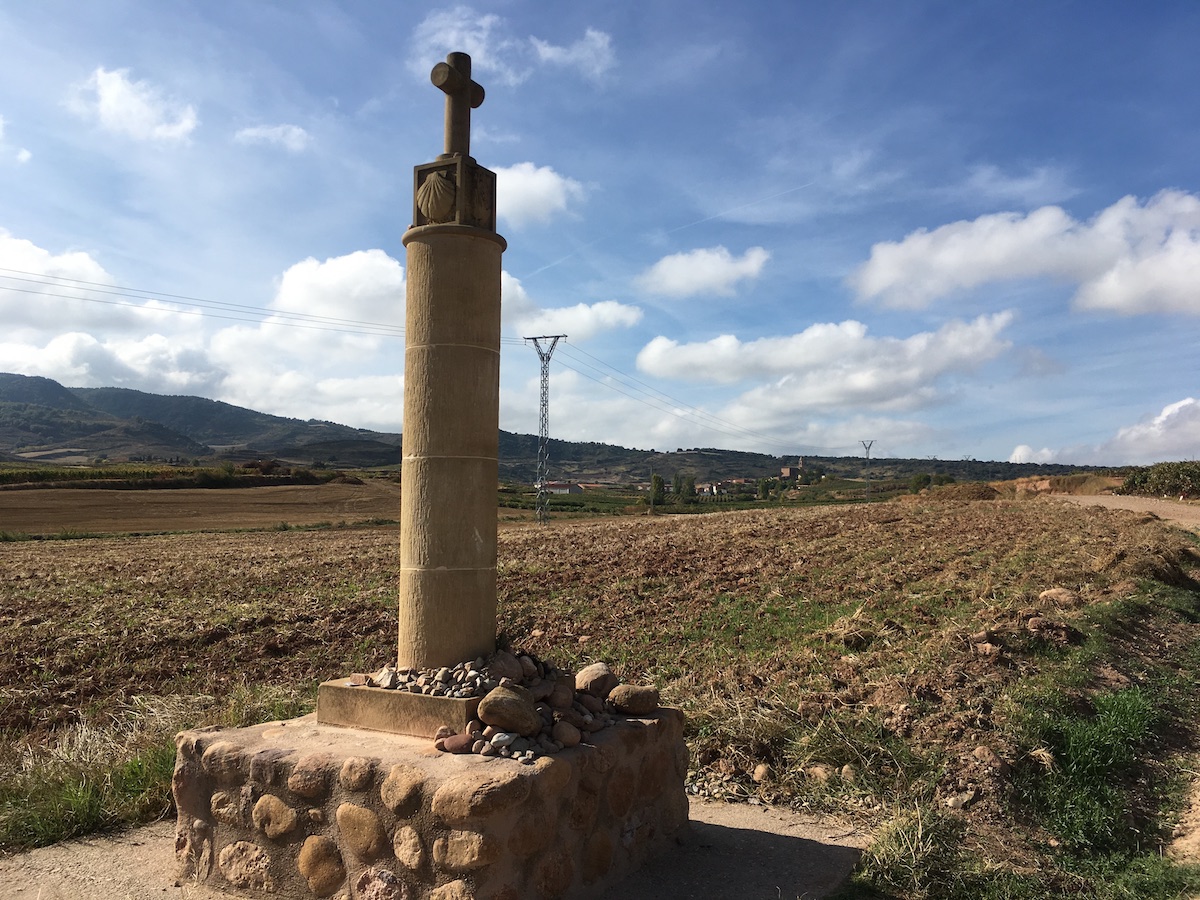 From where I stood it was pretty obvious that Ilay kind of wanted to stop, but also that he wanted to stay with the girls, and Monica got that vibe too. However the girls didn’t understand why he wasn’t staying with me and Loïc since he had known us longer and hadn’t seen him again yet. It made for a slightly awkward moment, until we said goodbye to them and went to find Loïc and the albergue.

He had been spending the last couple of hours on the river banks, getting drunk on wine and whisky with Jose, Christian and James. Jose was already quite drunk and kept telling me over and over that this wine was the best wine we would find because it was local, from Nájera. He left me quite a bad first impression and I stayed away from this group that night because of that.

After, we went into town with Sacha, Macarena, and a few others pilgrims met at the albergue to have dinner, but one by one everybody dropped until it was only Monica and I and we had what looked like a dinner date. It felt funny: since starting the hike, I felt like I was doing “something else”, something that is not my usual life; and everytime I was back in a city, as in Pau or Pamplona, having a night out, it felt like coming back to my regular life, which then felt irregular. That dinner, as much as I enjoyed it, fell into the same category: it was a piece of a puzzle lost in the wrong set.

And the feeling stayed even after going to bed, since our beds were put together, kind of like an elderly couple. But then again, it was better to have somebody I know and appreciate there rather than a complete stranger, or worse: a snorer… 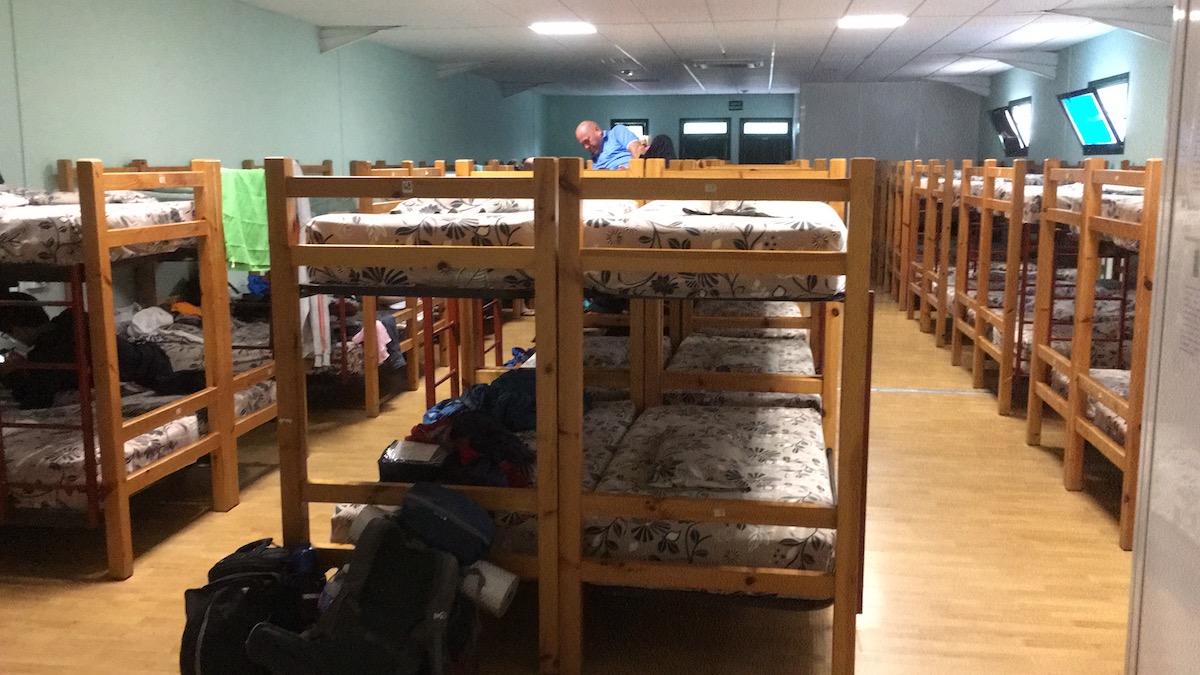 I walked with Loïc that morning, Monica having left way earlier, up until the coffee break where we met Ilay and the girls. But I lost fifteen minutes trying to find my phone. By the time I realized I had left it in the one pocket I discarded without checking, they had left again… When you’re dumb, you’re dumb. 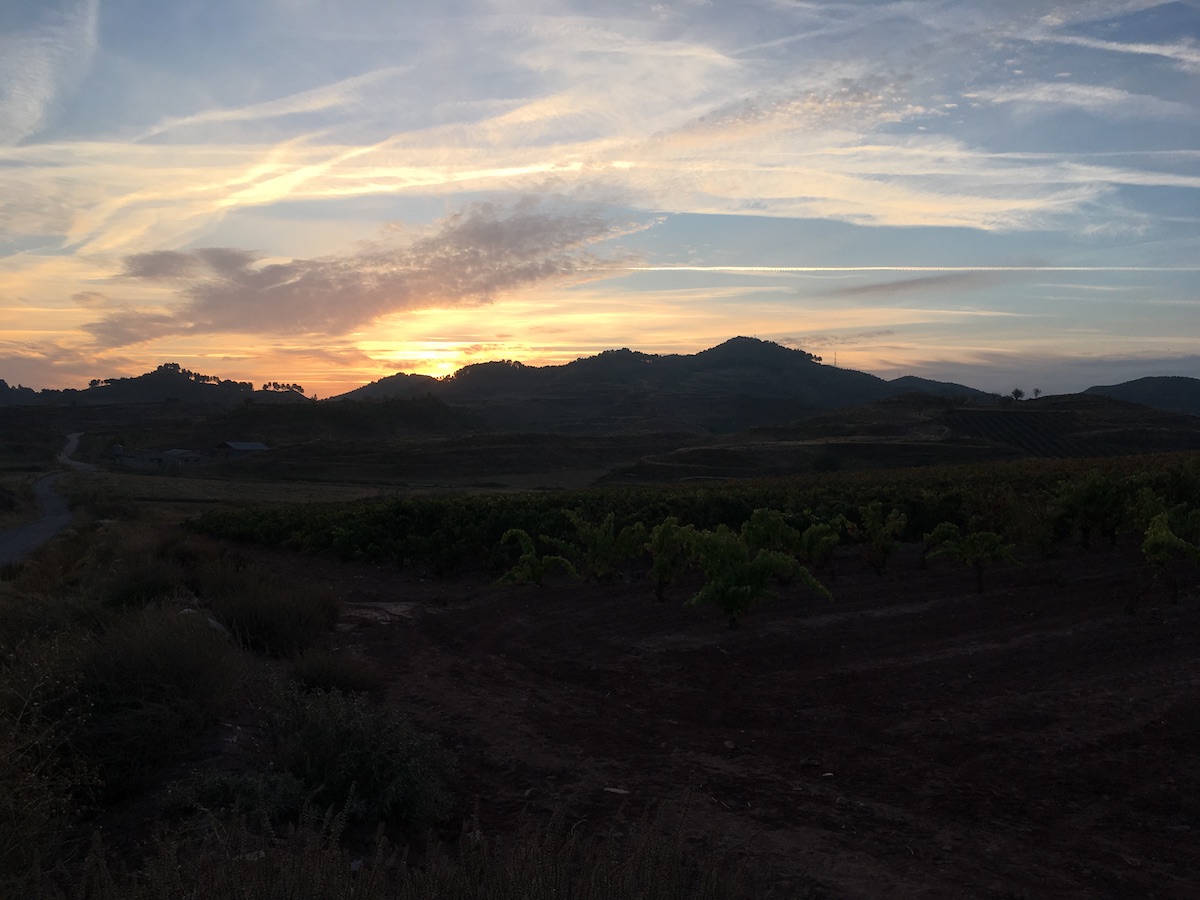 We walked with James a bit, one of the guys who was drinking with Loïc the night the previous day. He comes from the US, near Seattle, as most US-based pilgrims I met in this trip it seems. He was very inspiring: he has a friend that he sees maybe once or twice a year, and each year they have a challenge, each time harder than the previous one.

That time, it was running a 100km race! James was doing his camino as training for the race, running instead of walking here and there. It made me realize that the difference between he and I his a matter of willpower and doing, instead of pushing things down the line. I learned a lesson :)

We thought about stopping in the next town for lunch but arrived there too early to our taste, so we kept walking until we reached Grañón. There was a good chance that this would be our stop of the day: it was time for Ilay to stop his camino and we wanted to be there for his last night.

We ate while waiting for them and they finally arrived. After checking in the donativo albergue closed to the church, we went to the bar in front of it and had many beers in the sun. That afternoon felt really good, with Krista and I staying outside almost until we couldn’t find any place where the sun was still hitting.

The dinner that night was cooked by a group of italians, first met the night before in Nájera. Once again, it was very friendly, with everybody helping, and some people playing music and singing… Donativos are really something else, mood-wise.

Since he couldn’t cook dinner the previous night, Ilay decided to bless us with his pancakes, “known through all of Israel” as he told us. After making another round of goodbyes, we left him and started walking with the girls, and Anna and Margaret. Good old me, surrounded with girls even when doing a hike!

Anyway, the more I walked, the more people I met, and the more I learned, talked and exchange. I realized that I couldn’t find the time to write everything that I felt was noteworthy, or I would have had to miss conversations and moments… There’s only so much time in a day, and what was not spent walking was spent enjoying the company I was in. 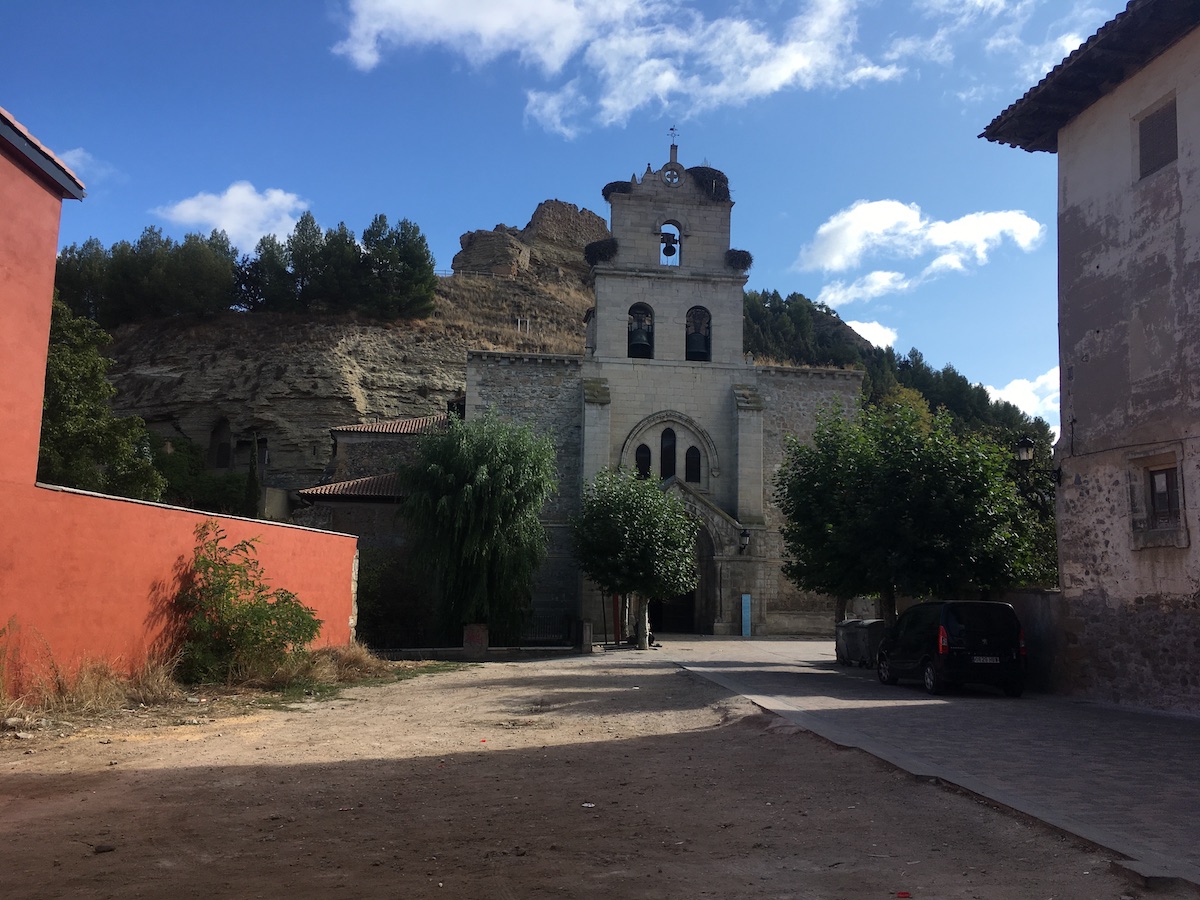 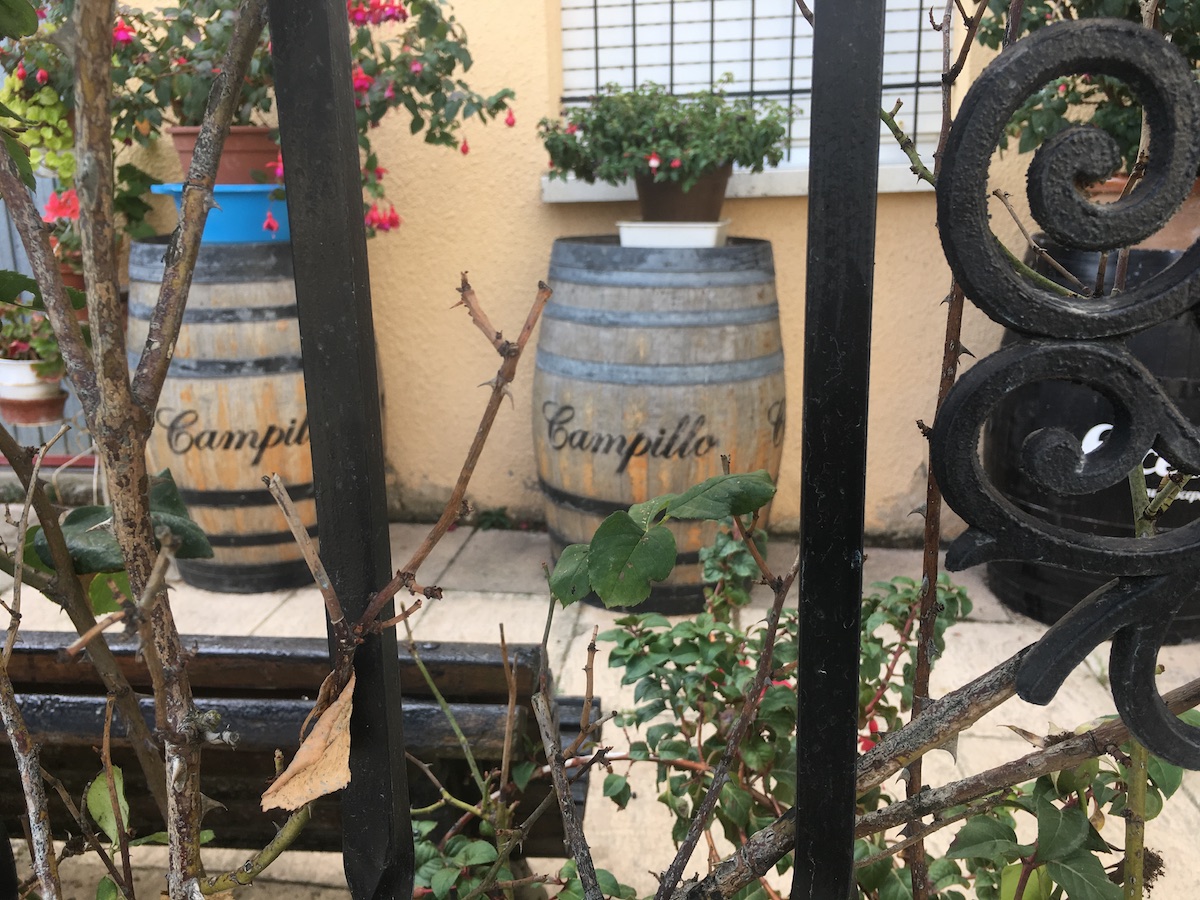 Which is why I stopped in Tosantos instead of going further as I had planned. I was more interested in staying with Saula and Krista than in walking to the next town to be in the same place as Loïc.

Since we started meeting more people, we both had started walking as it suited each of us. We were no longer using the tent and therefore not required to be in the same place at all times; and with so many people on the road, we had no trouble finding company. It’s not as if we were tired of each other or anything, but we knew we would meet again down the road anyway and there was a whole lot more to this trip than just the two of us. 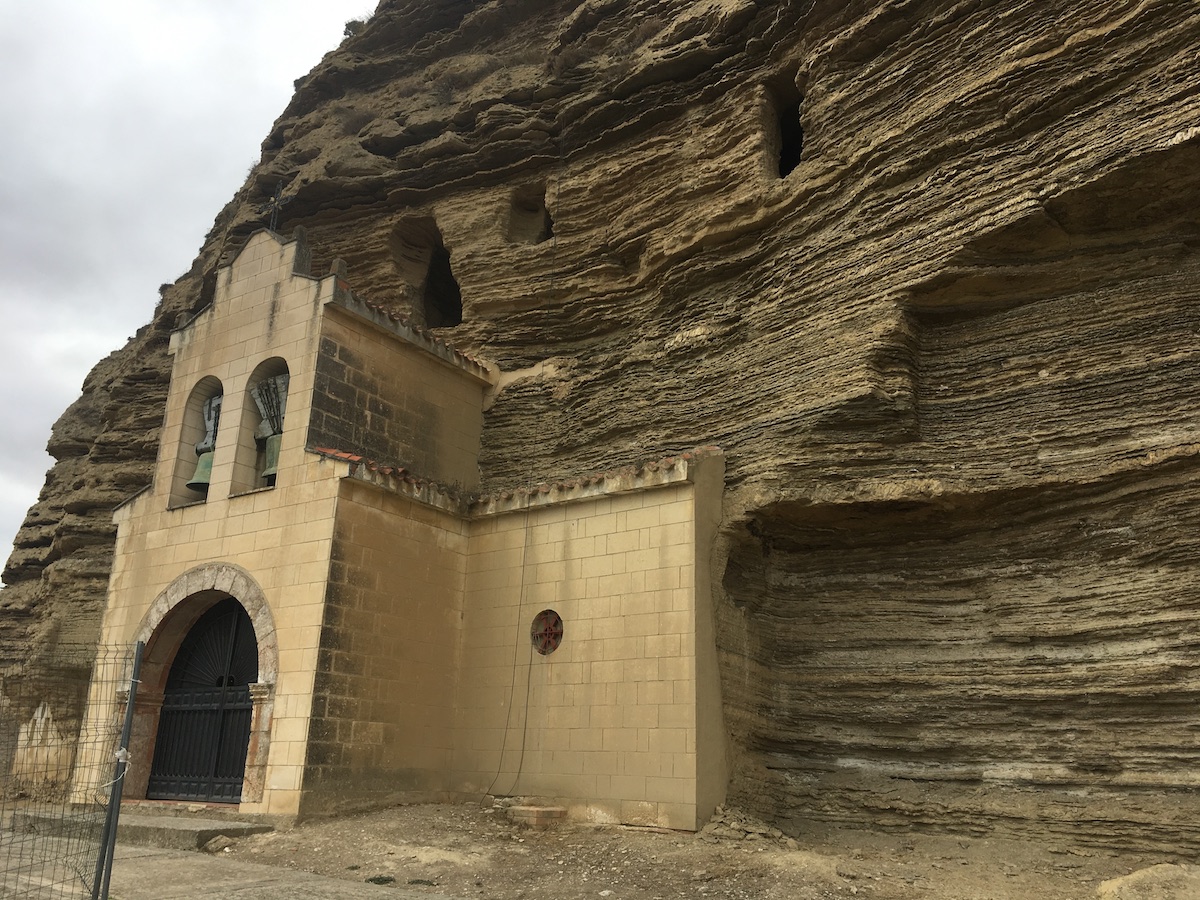 It was quite cold in Tosantos, even though it was sunny. We went to see the church, one that was built inside the side of the mountain, making for a good landscape. The albergue was donativo, so once again everything was shared. We then went to bed and after a session of group hugs and giggling like kids, we fell asleep.

I started walking alone that morning: I needed to warm up and what better than a quick walk? I waited for the girls in the first town for a coffee, then walked with them for the rest of the day. 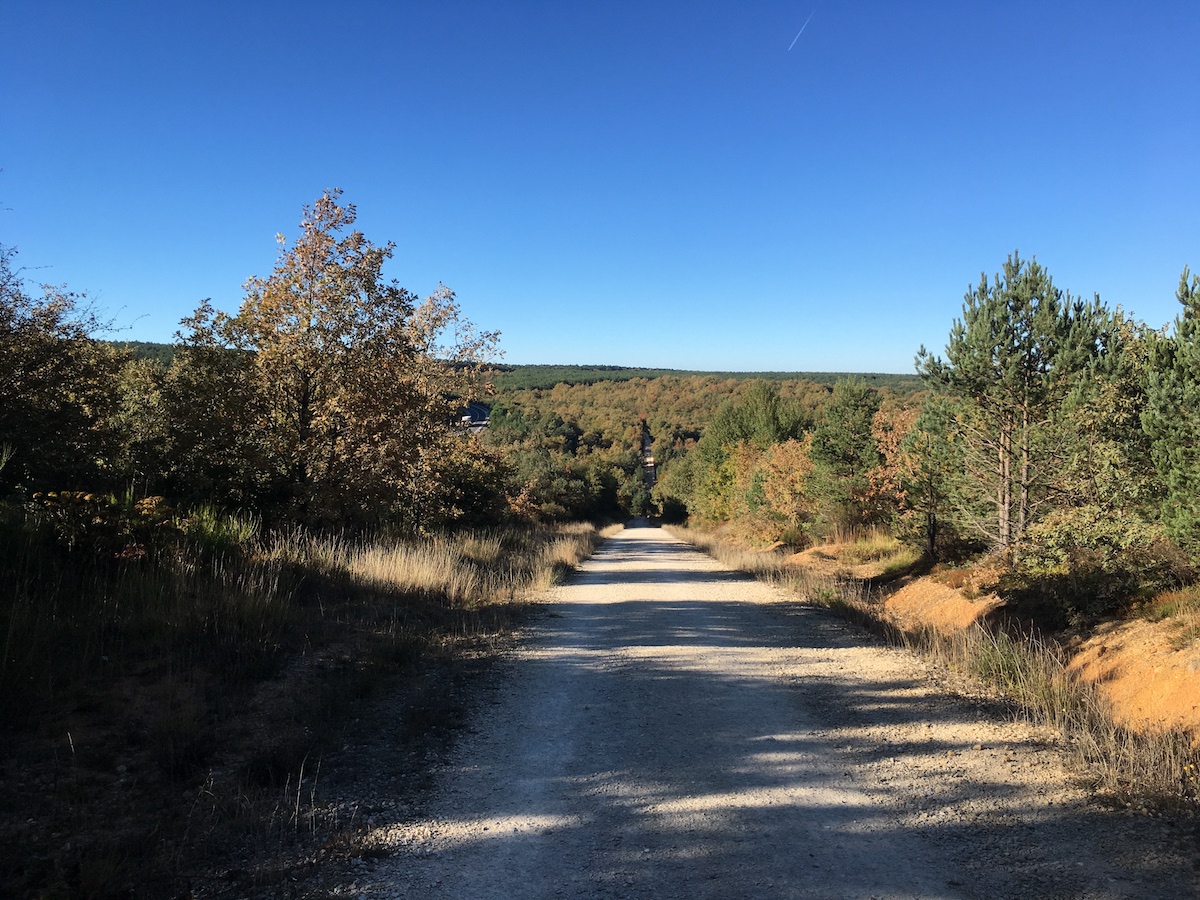 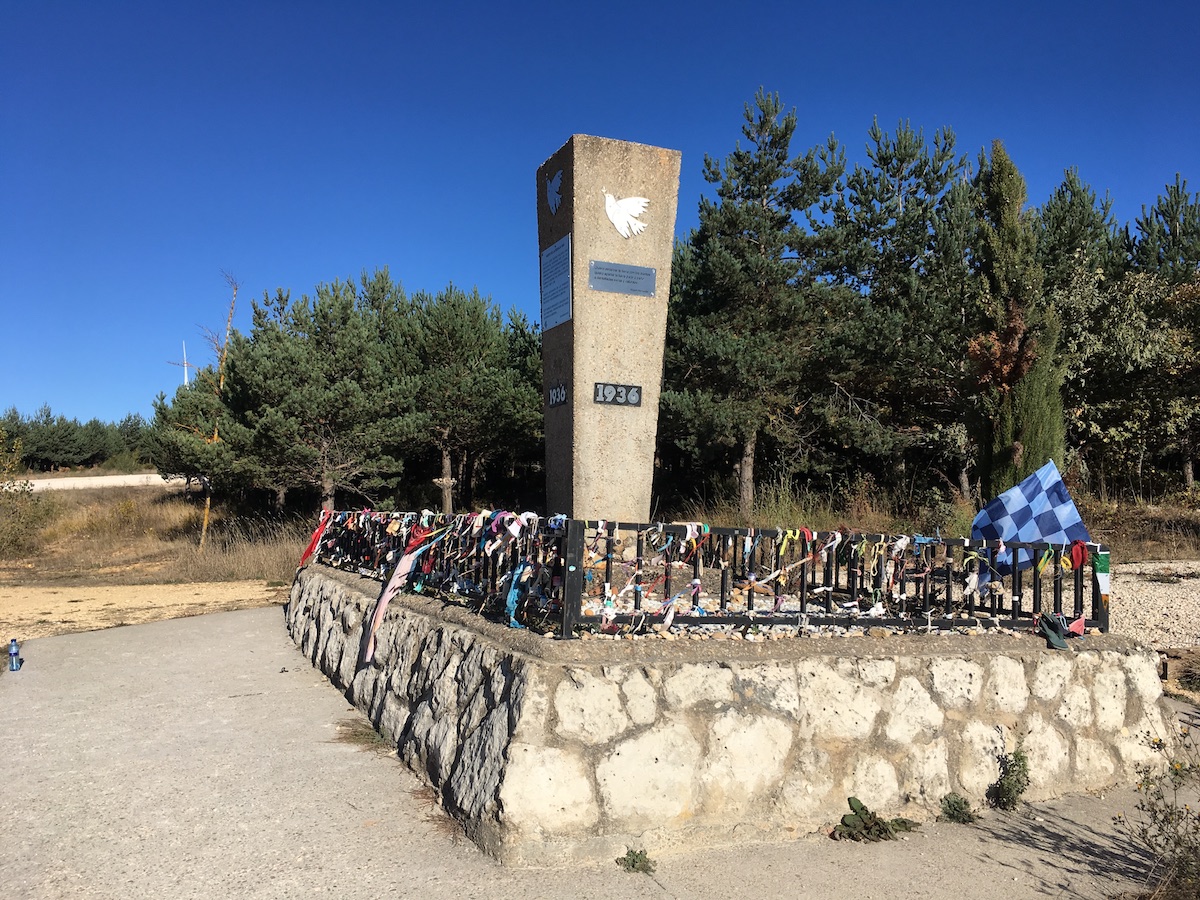 The path took us mainly through forrests, which was a nice change from the previous days where we were mostly in fields and hills. Our stop for the night is in Atapuerca. We found an albergue that was probably a barn at some point, but got converted. It felt very homey and cosy :)

A few pilgrims we knew arrived after us: Monica, Christian, Macarena… I remember finding the inspiration to write a one or two short stories before having dinner, a first since starting the hike. Before leaving, I had planned on using the free time to write more, but you know what tends to happen when plans meet reality. 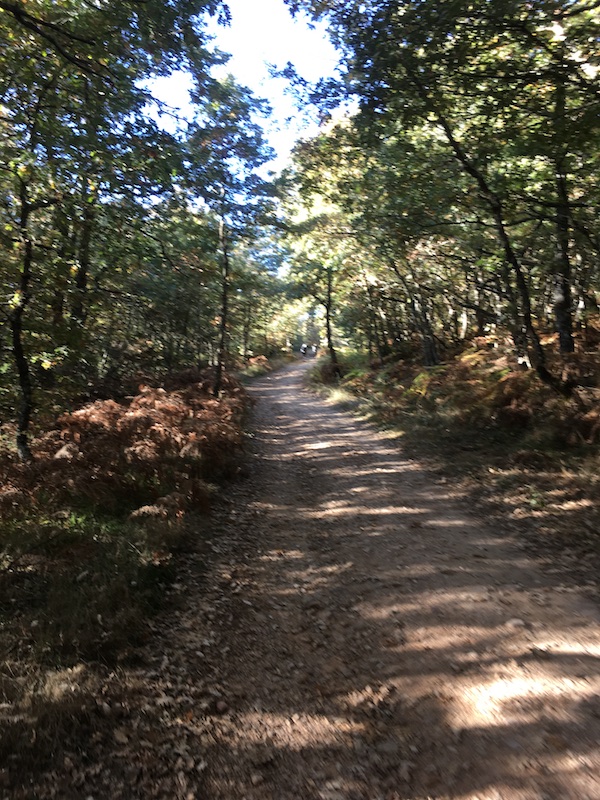 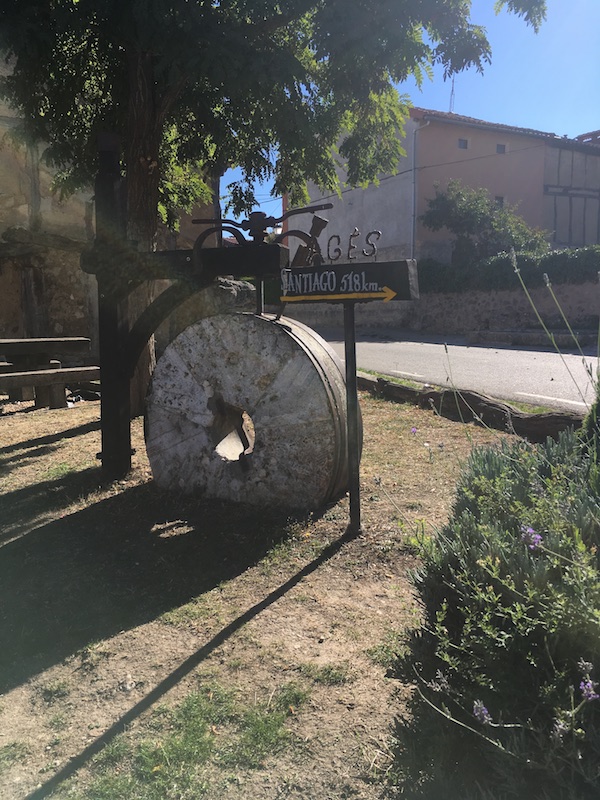 We then went to the bar-restaurant next door, but I remember feeling quite tired so I went to bed early, leaving Monica, Christian and a few of the others. It seemed they had quite a night, though from the barn-albergue we couldn’t hear a thing.